A HOUSE IN THE FOREST

The plot is located in a picturesque pine forest, with beautiful ivy-covered pines growing on it, which from the very beginning captivated both the investor and the designers.

Starting to design the house, Z3Z ARCHITECTS designers faced the task of inserting the building among the trees, so that as little as possible of the existing beautiful, old tree stand had to be cut down. Together with the investor, they found a clearing on the plot, which they chose as the place for the construction of the house. It also fit in with the later discovered vision for this plot on the part of the State Forests. On the one hand, the difficulties of building in the forest, and on the other hand, the desire to preserve as many trees as possible contributed to the fact that the house almost grows out of the forest. 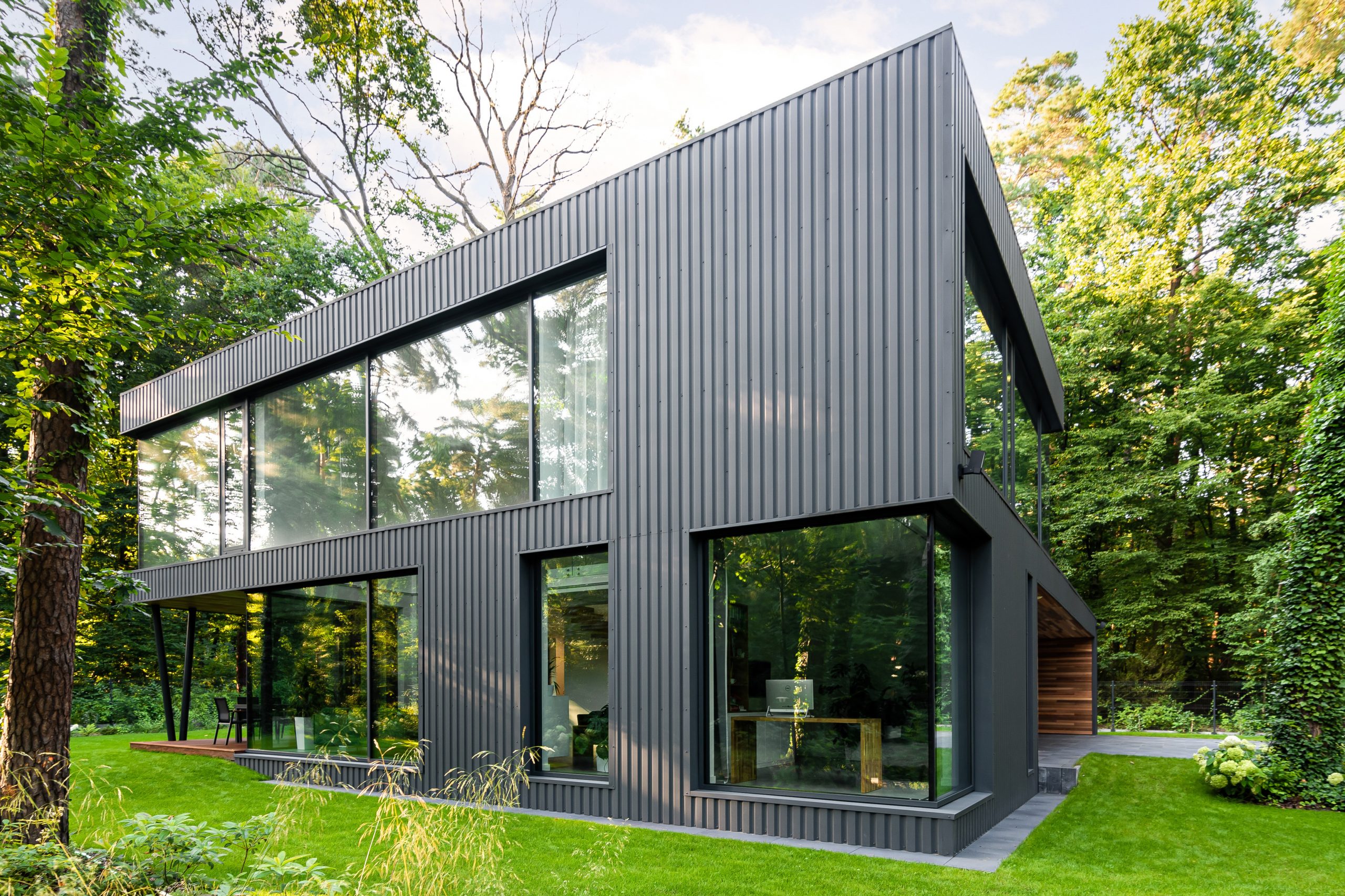 The use of sheet metal, a material seemingly alien to the natural landscape, was a hit. It is hard to imagine any other material that would make the house blend in better with the surrounding nature. Passing the road adjacent to the plot, one has the impression that the house has always been there, as if it was rooted in the greenery. Black trapezoidal sheet was used as the external façade skin. Wooden elements recessed into the block of the house were made of Canadian cedar boards. Its irregular structure is to emphasize the forest heterogeneous nature of the surroundings. In this way, the façade and the body of the building give the impression that it has belonged to this place for a long time, despite its bold form. 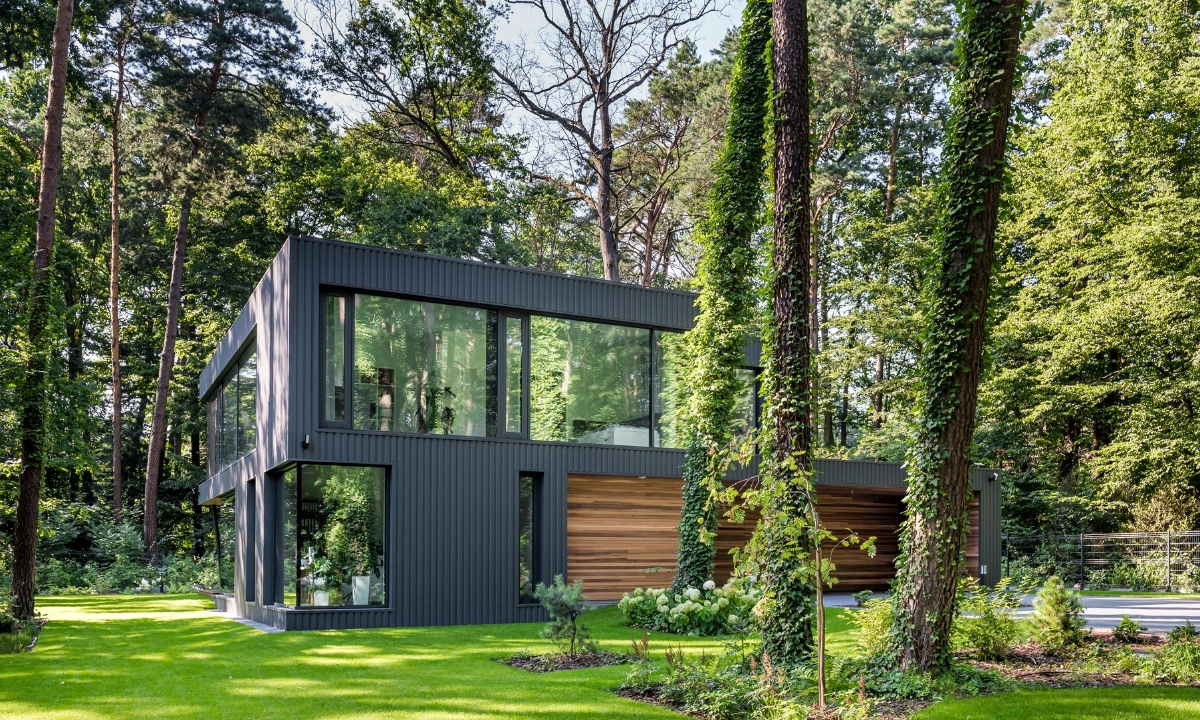 The front of the house invites users with a wooden recess that stands out from the rest of the block, clearly indicating the entrance. The extensive roofing in this place also houses the entrance to the garage with a garage door hidden under cedar wood. A similar wooden hollow is located on the other side of the building and forms a recreational terrace.

The interior of the building was kept in ascetic white with concrete floors. From the inside, thanks to the largest possible glazing, there are views of the greenery. Particularly interesting effect is given by the corner windows with panes joined in the corner without a post, they make the forest within arm’s reach available from the inside. An interesting effect was created in the children’s rooms where the entire long wall of the connected rooms is a window from which you can admire the majestic ivy-covered pines. The interiors do not distract attention from the images of greenery, they harmonize with them without competing. 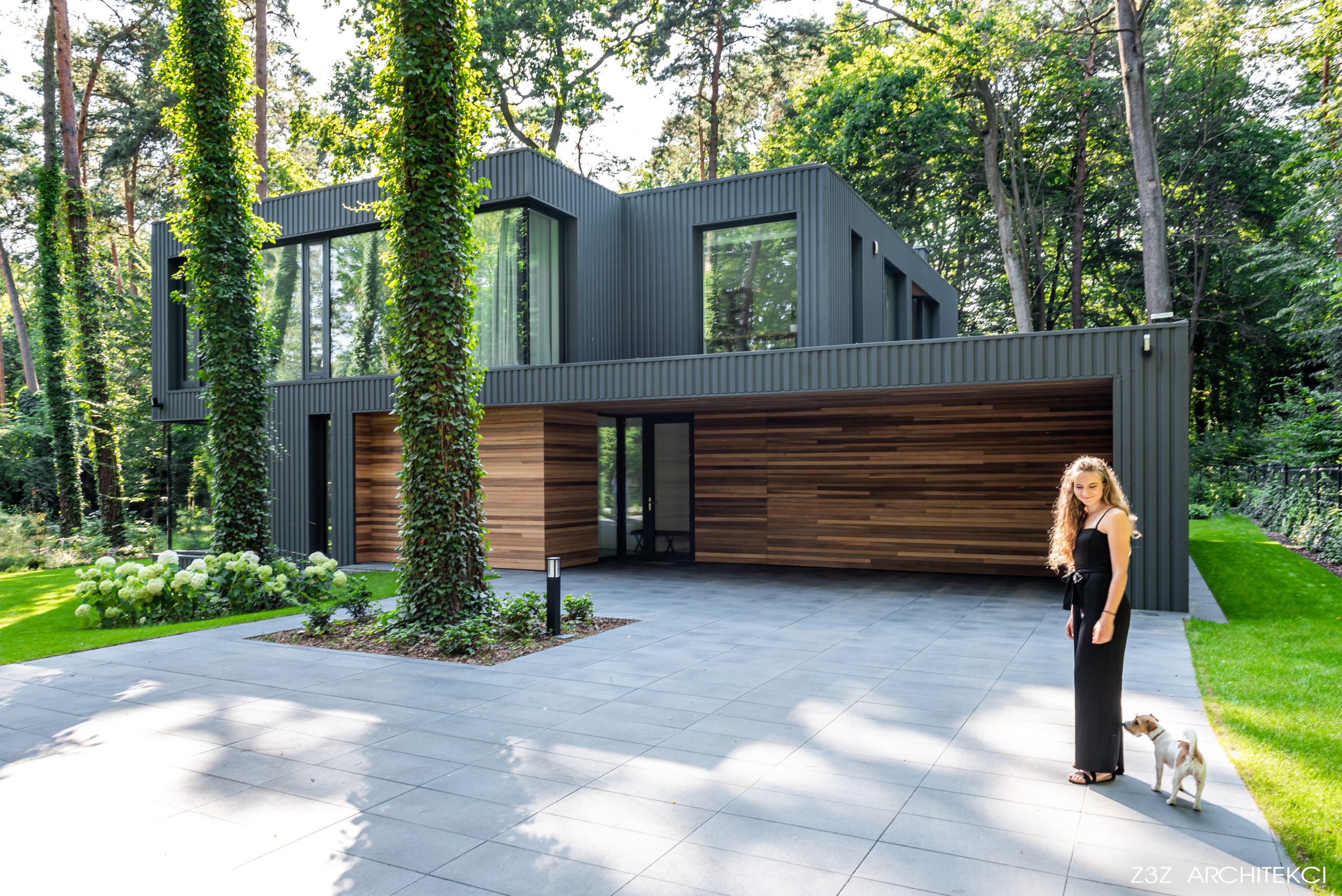 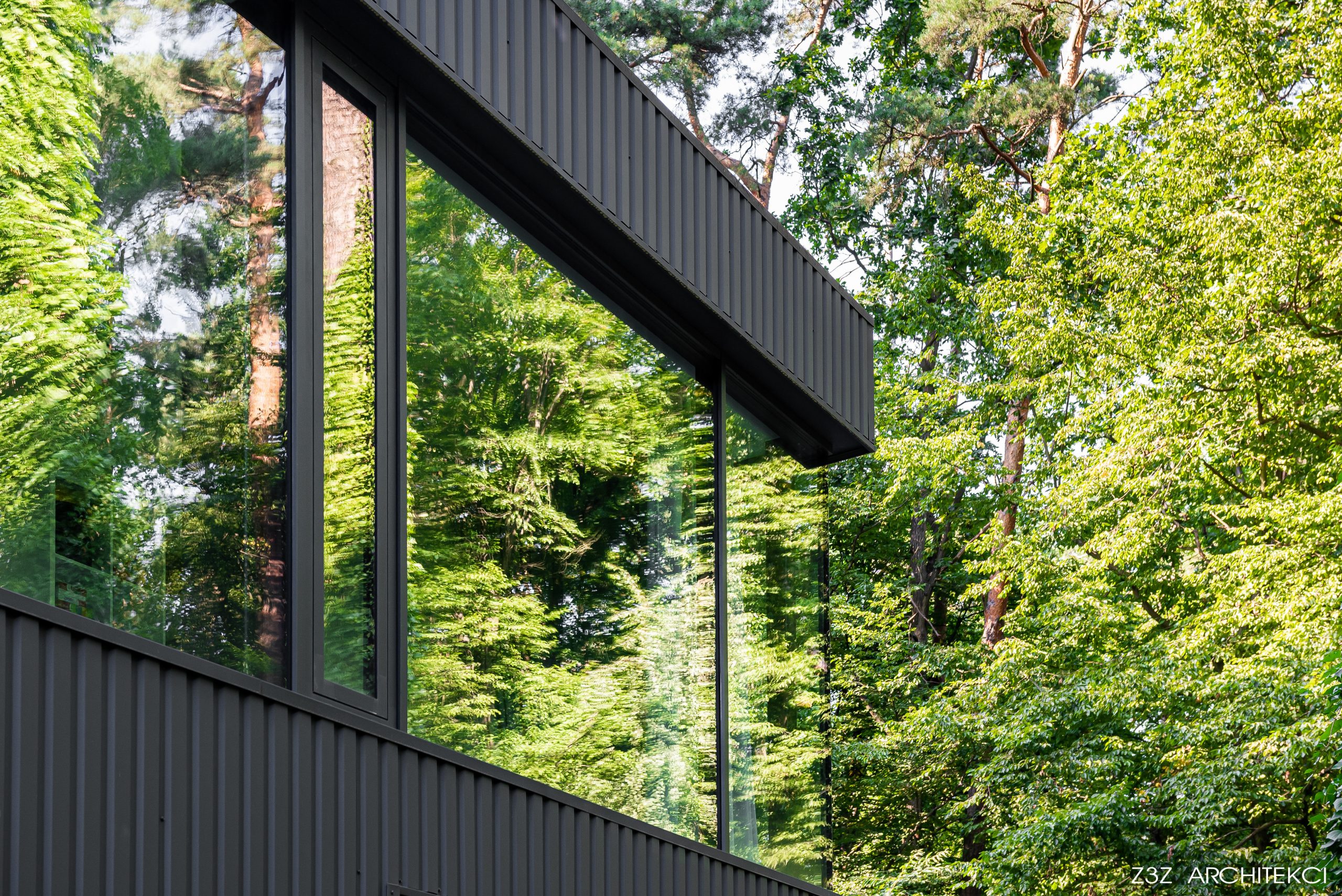 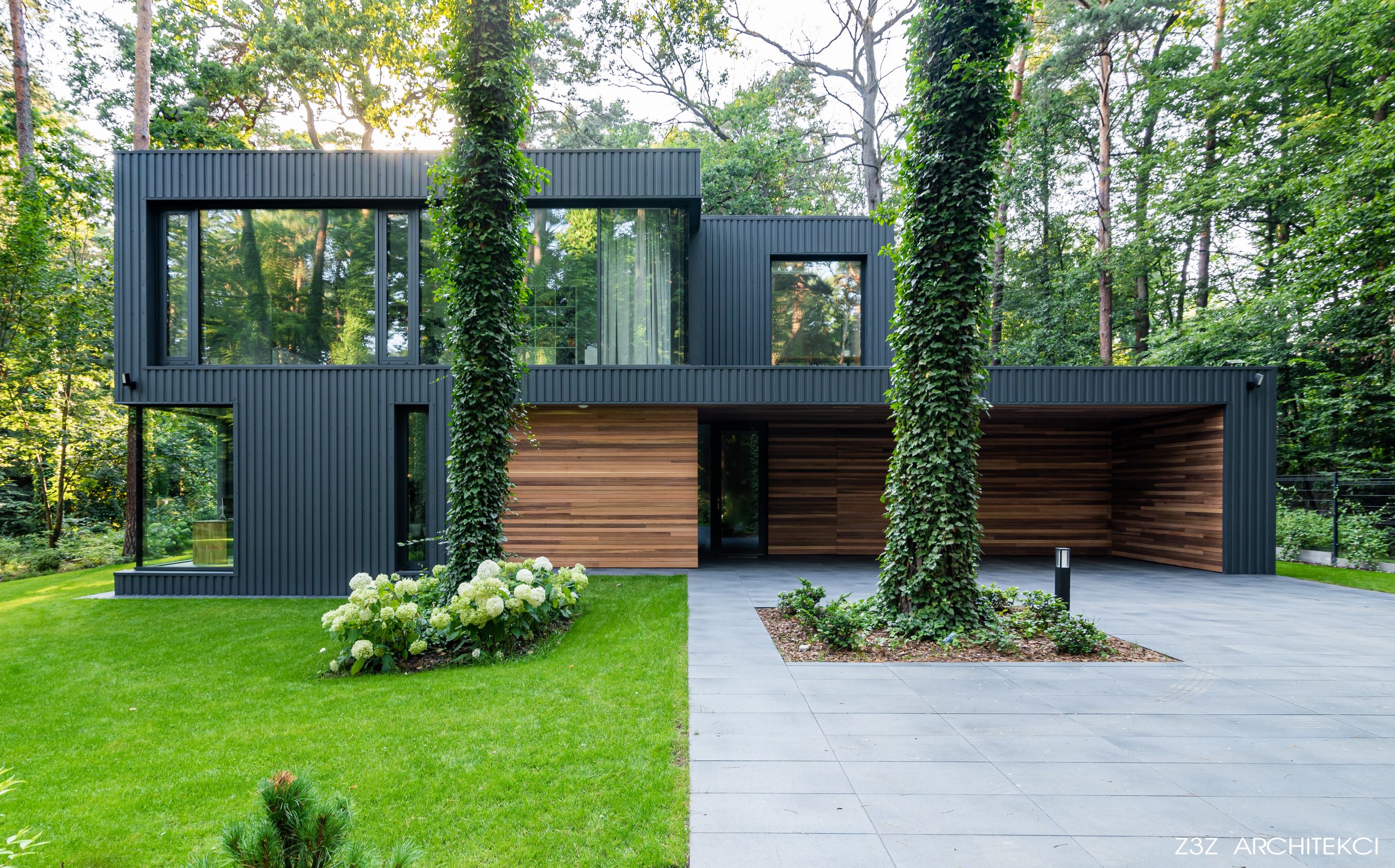 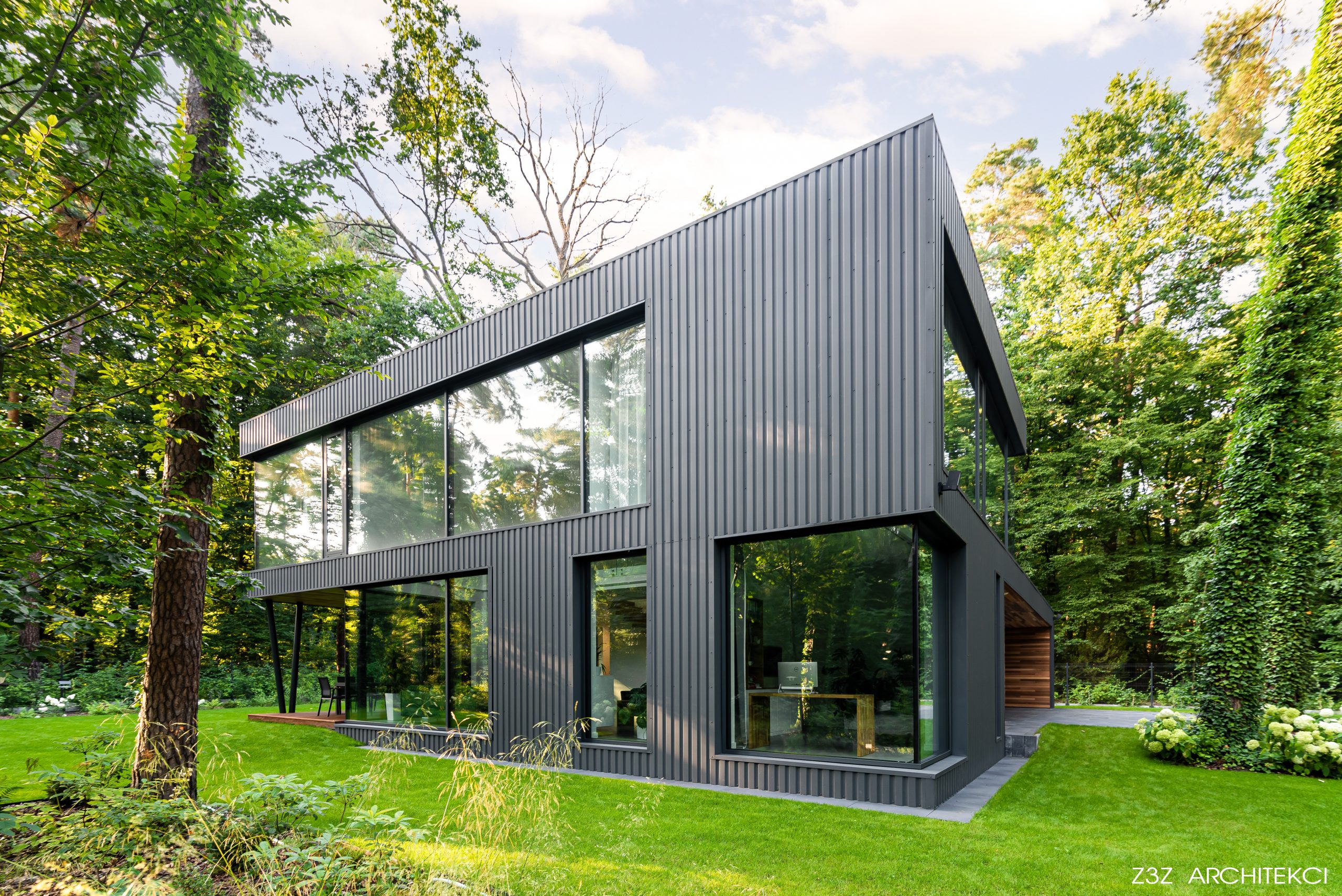 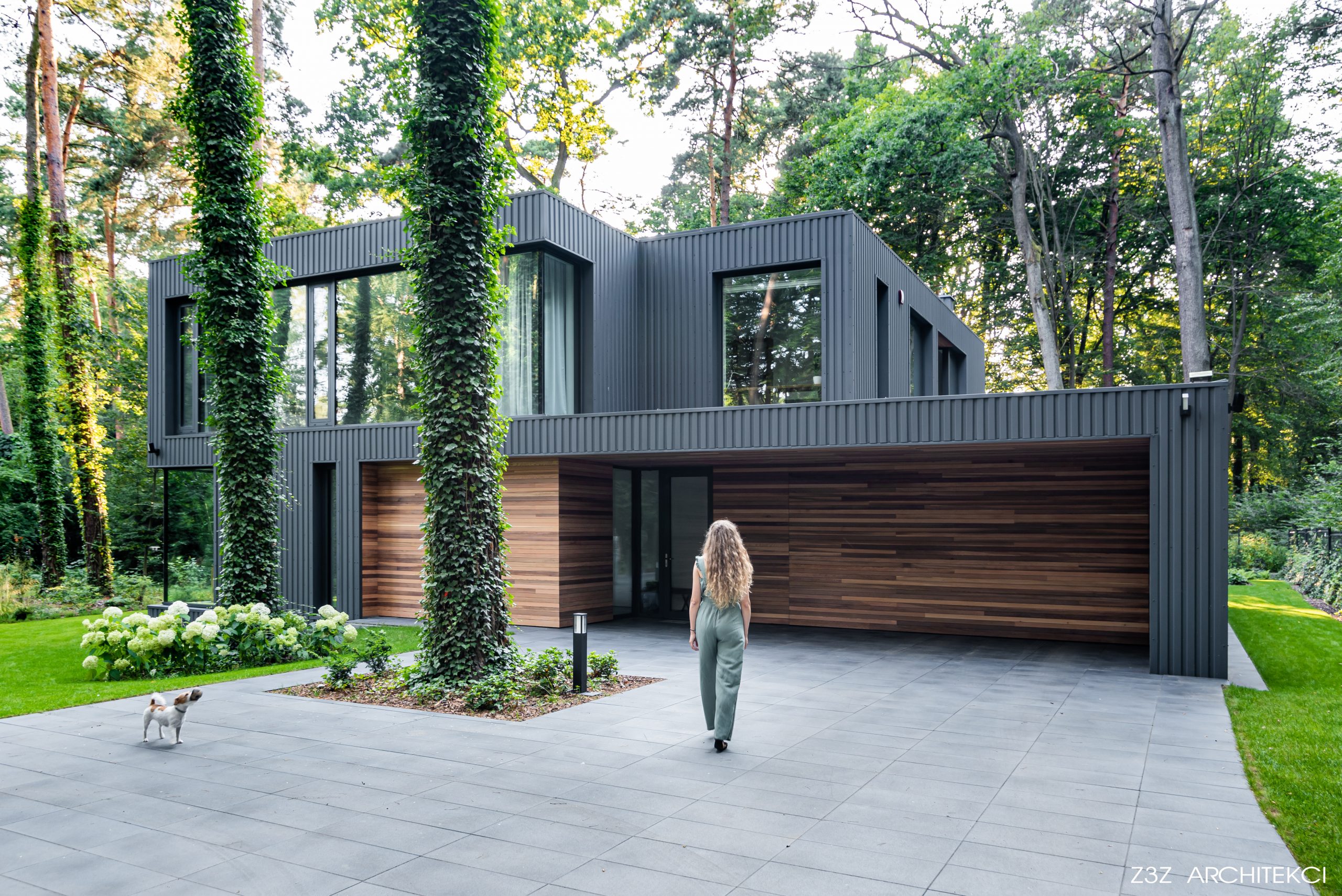 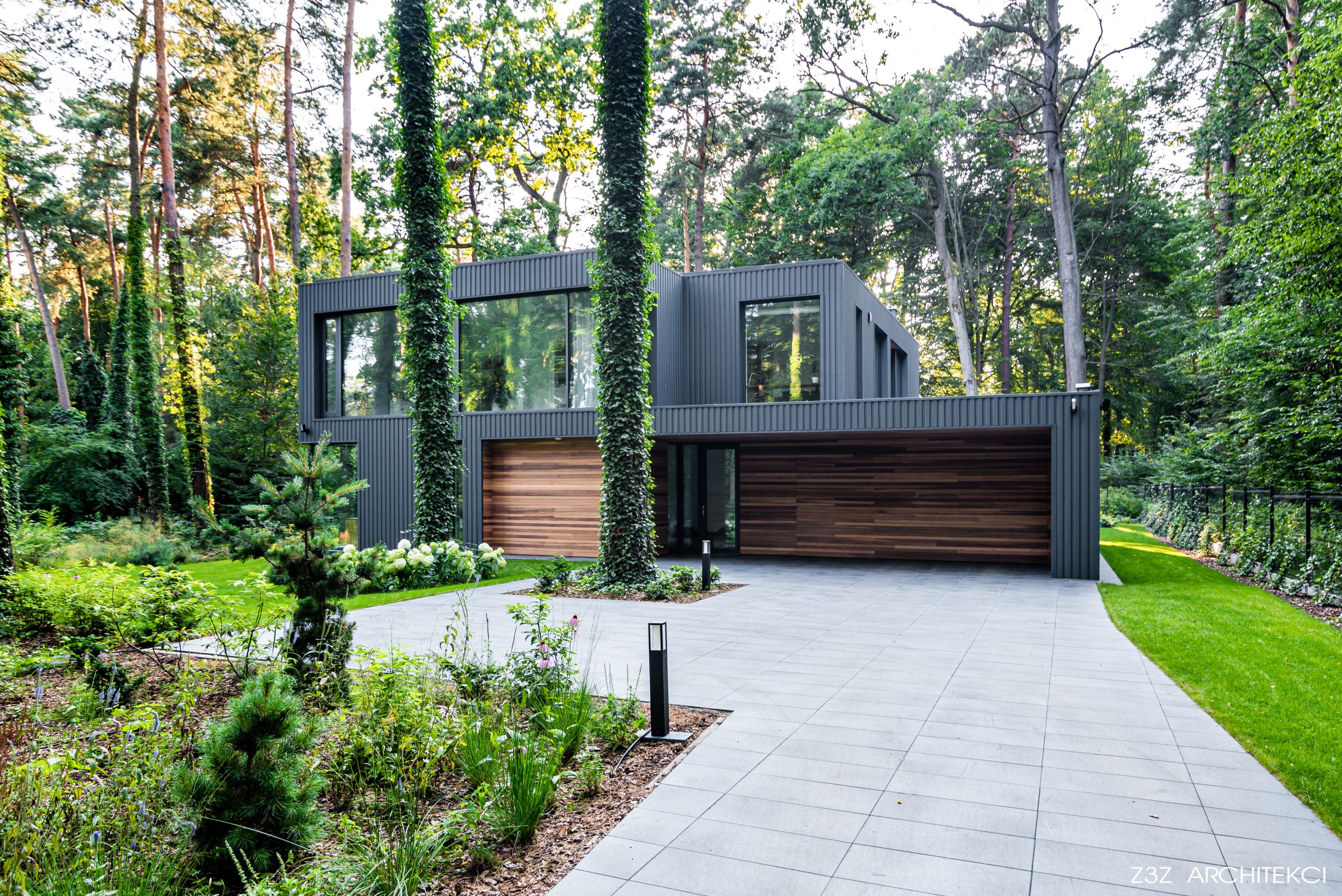 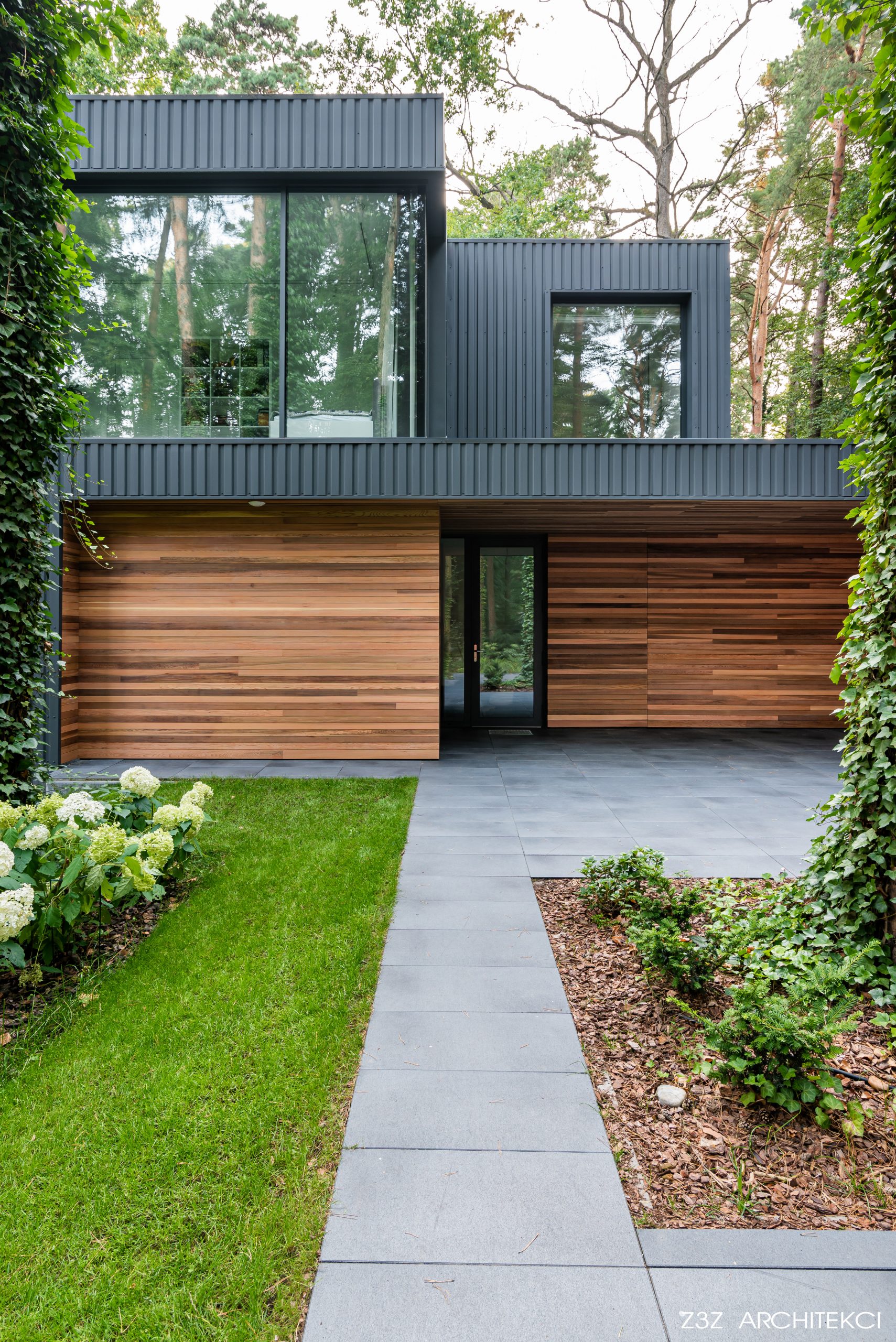 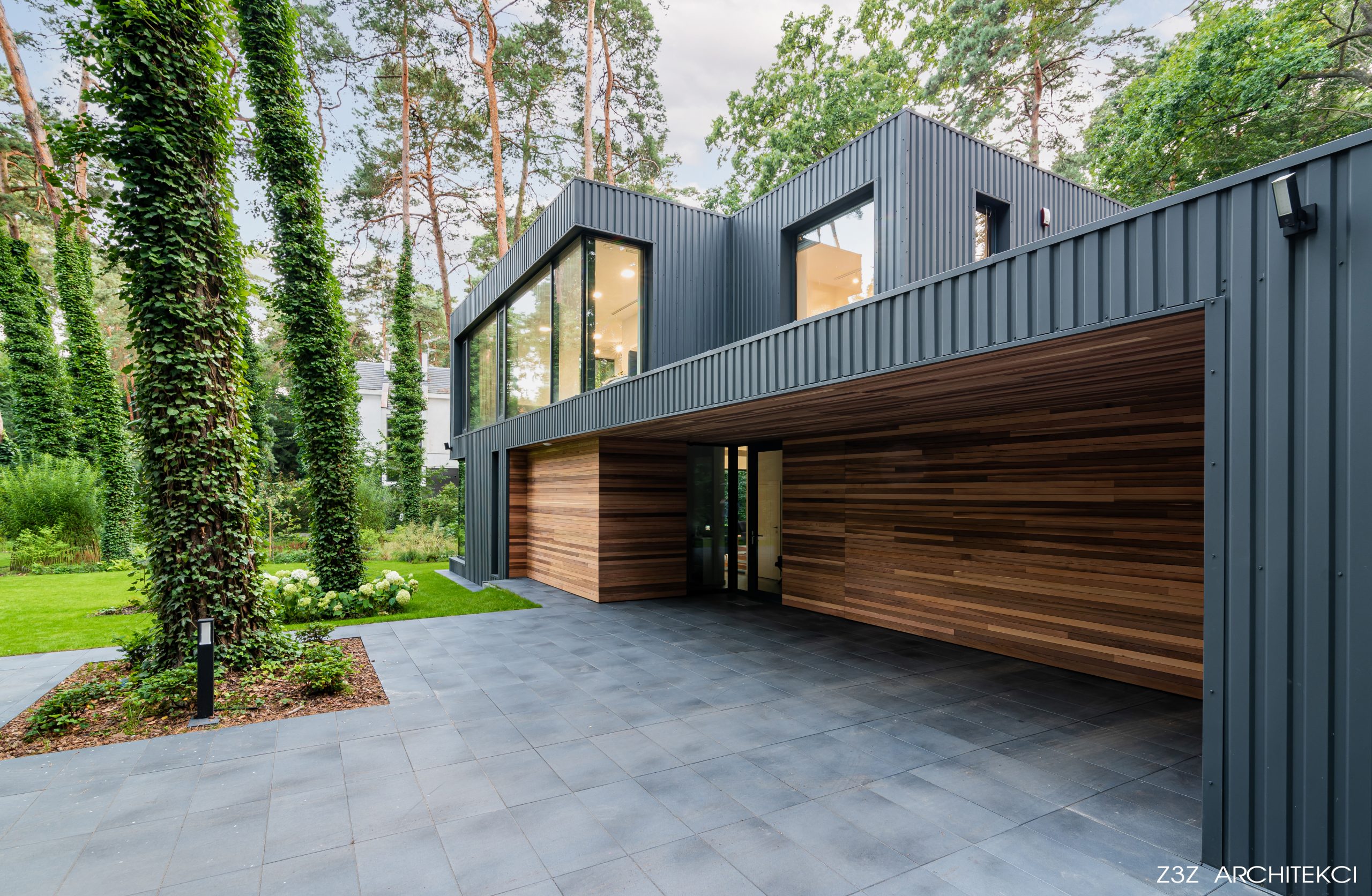 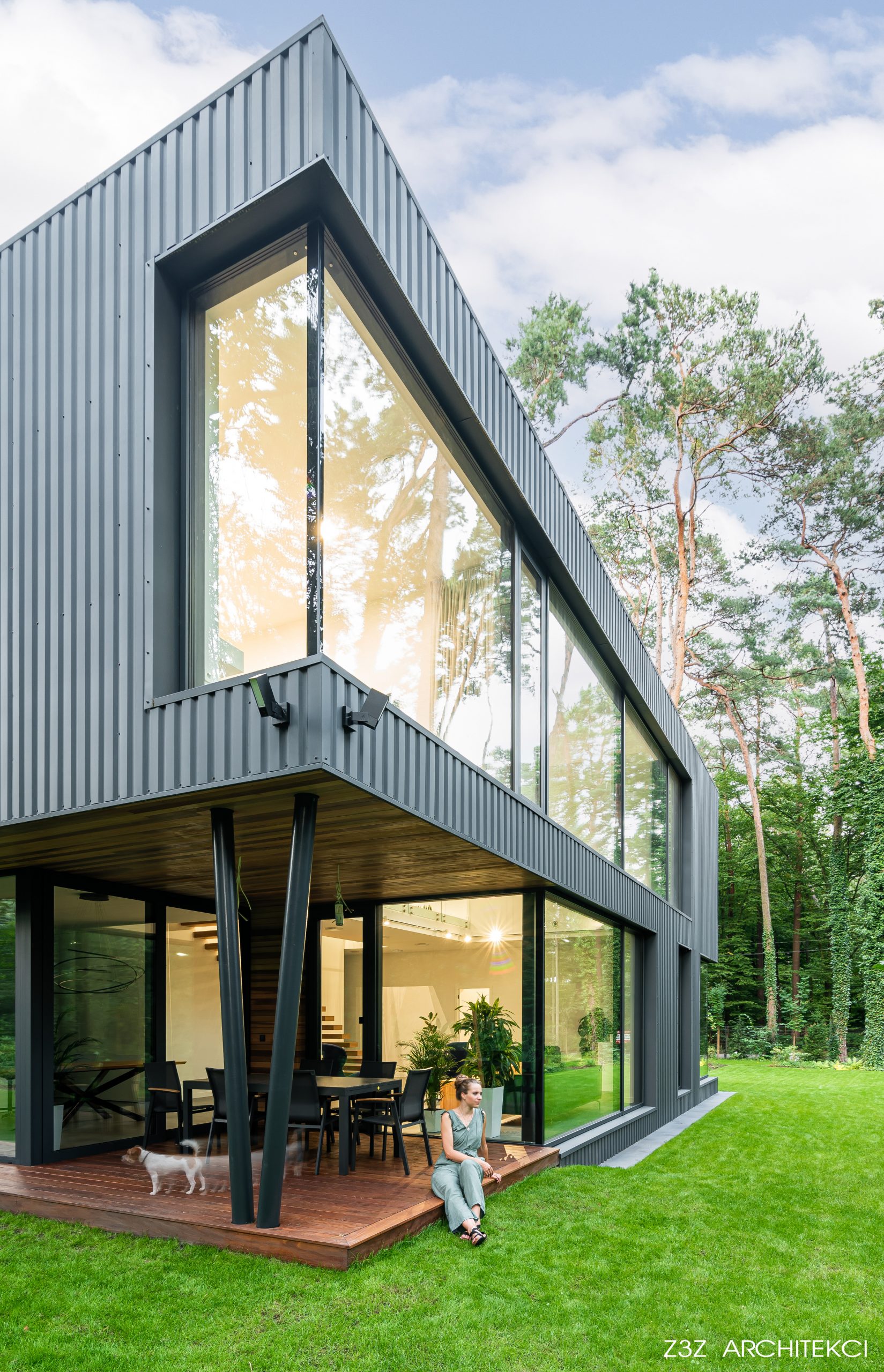 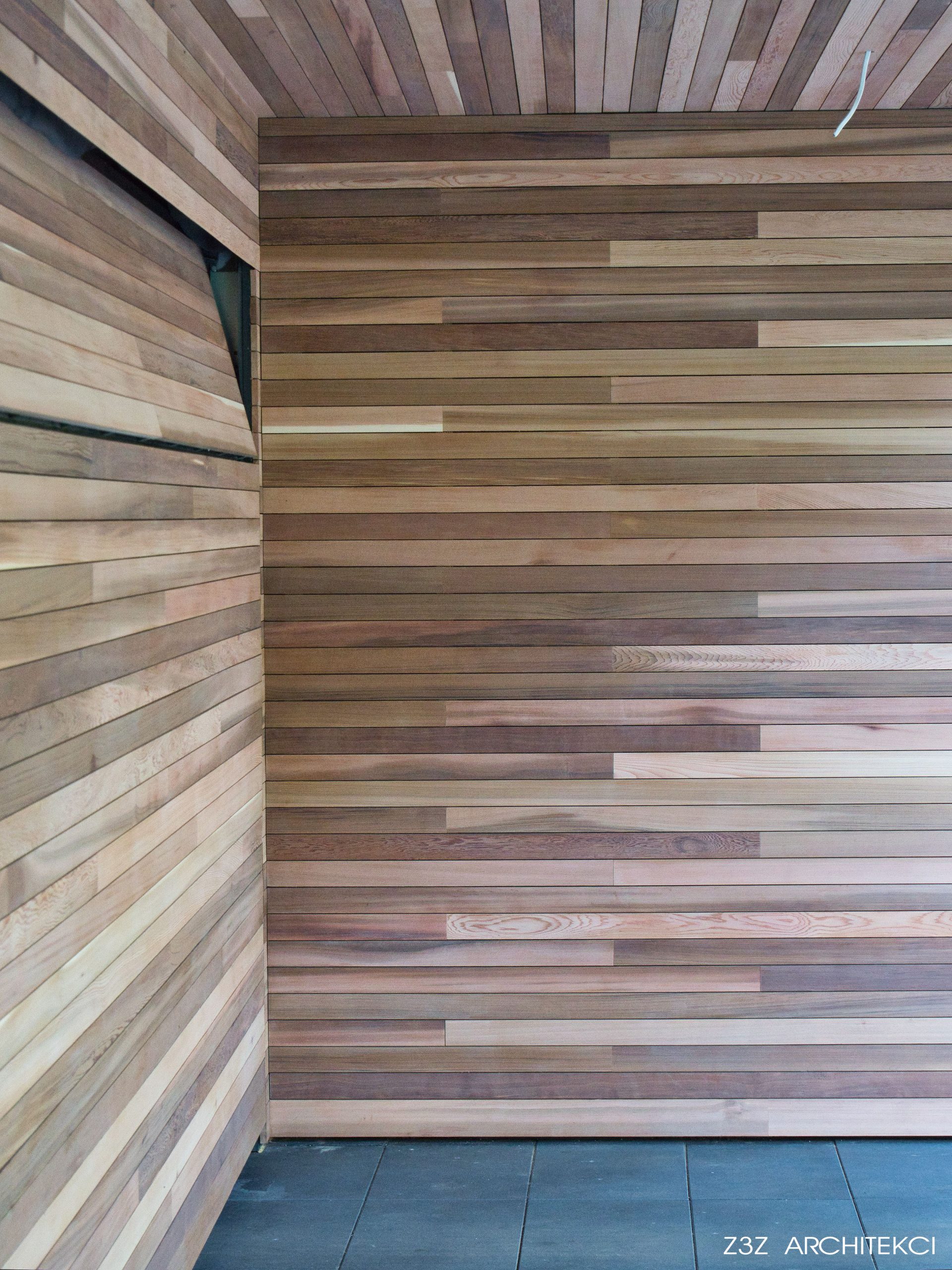 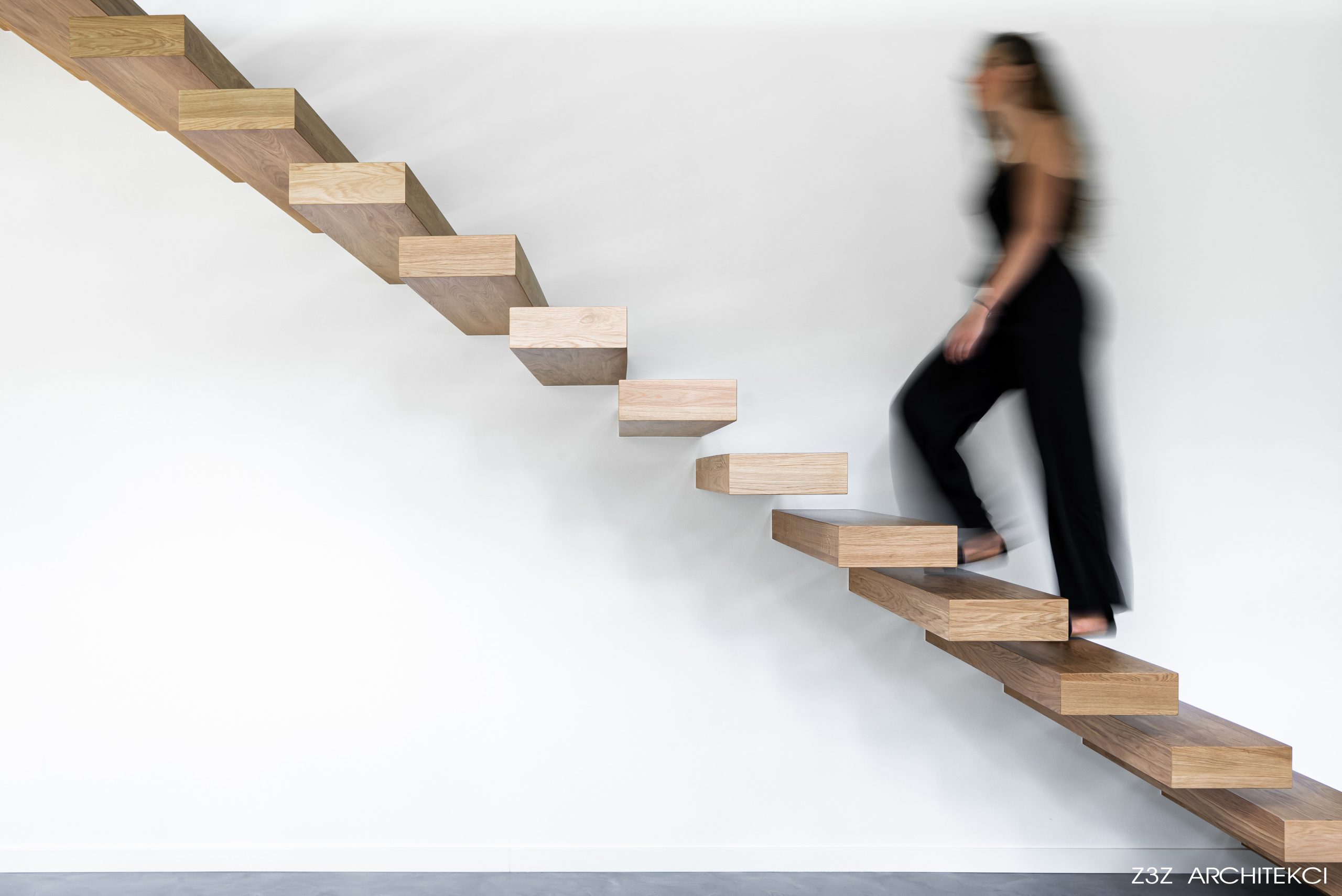 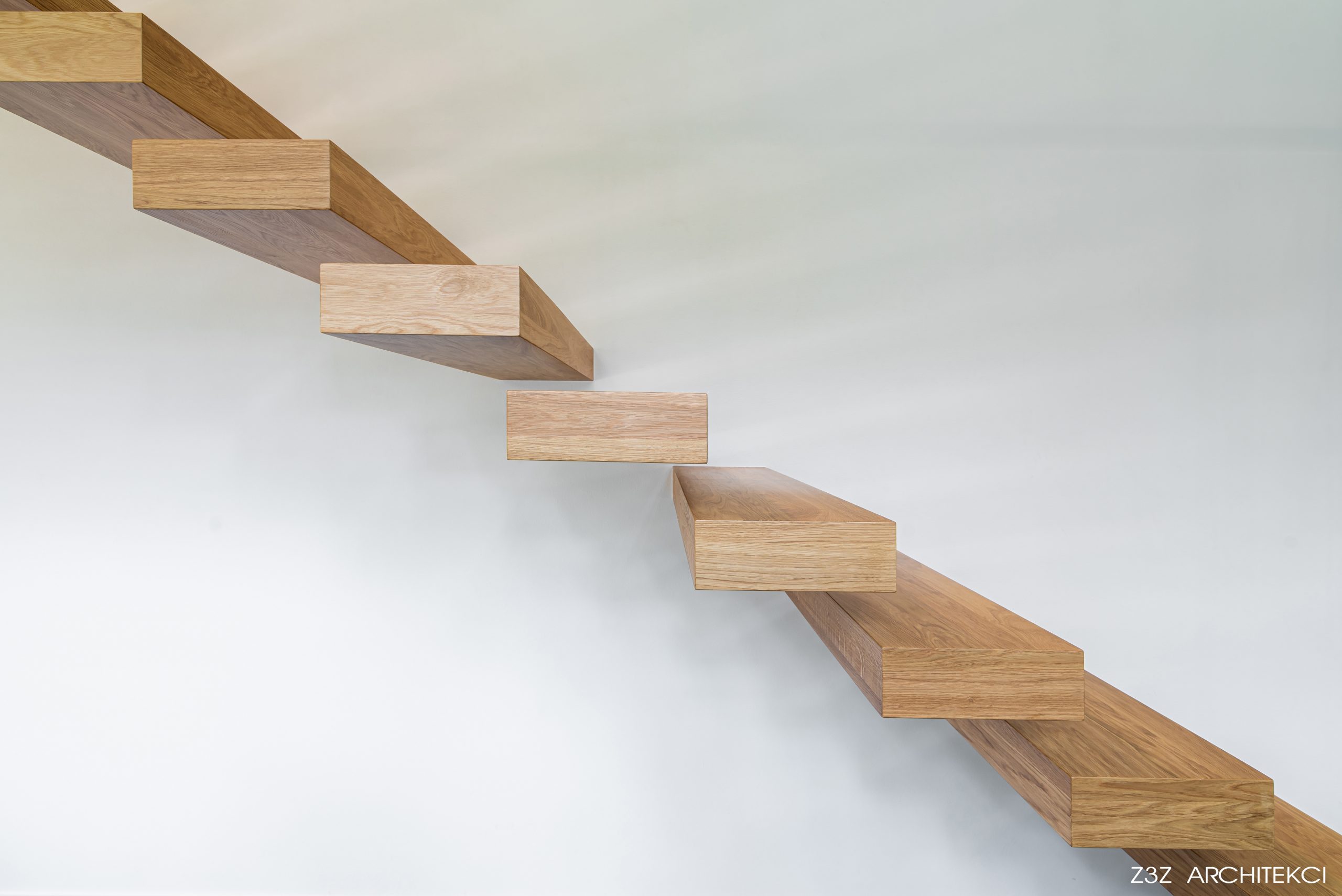 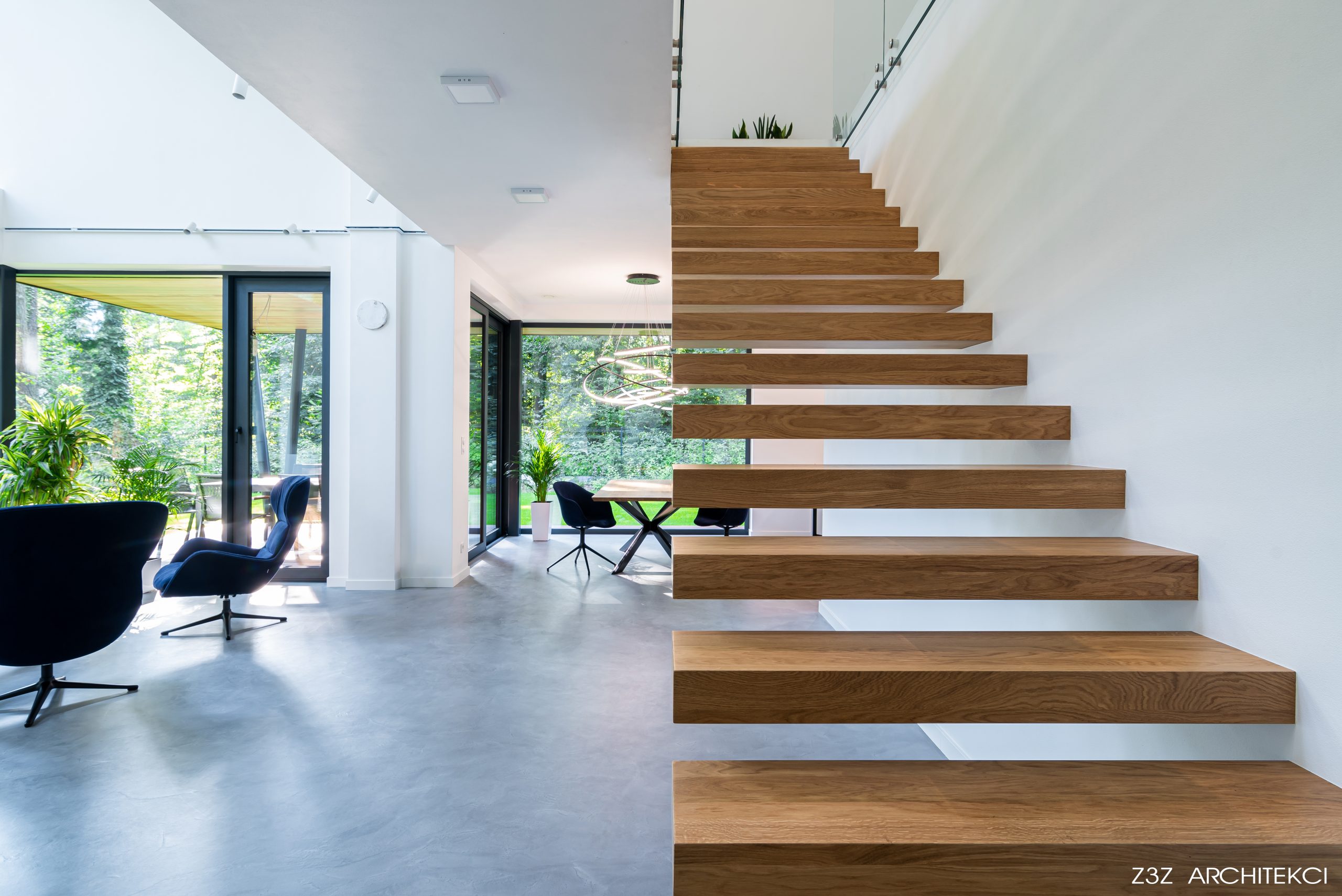 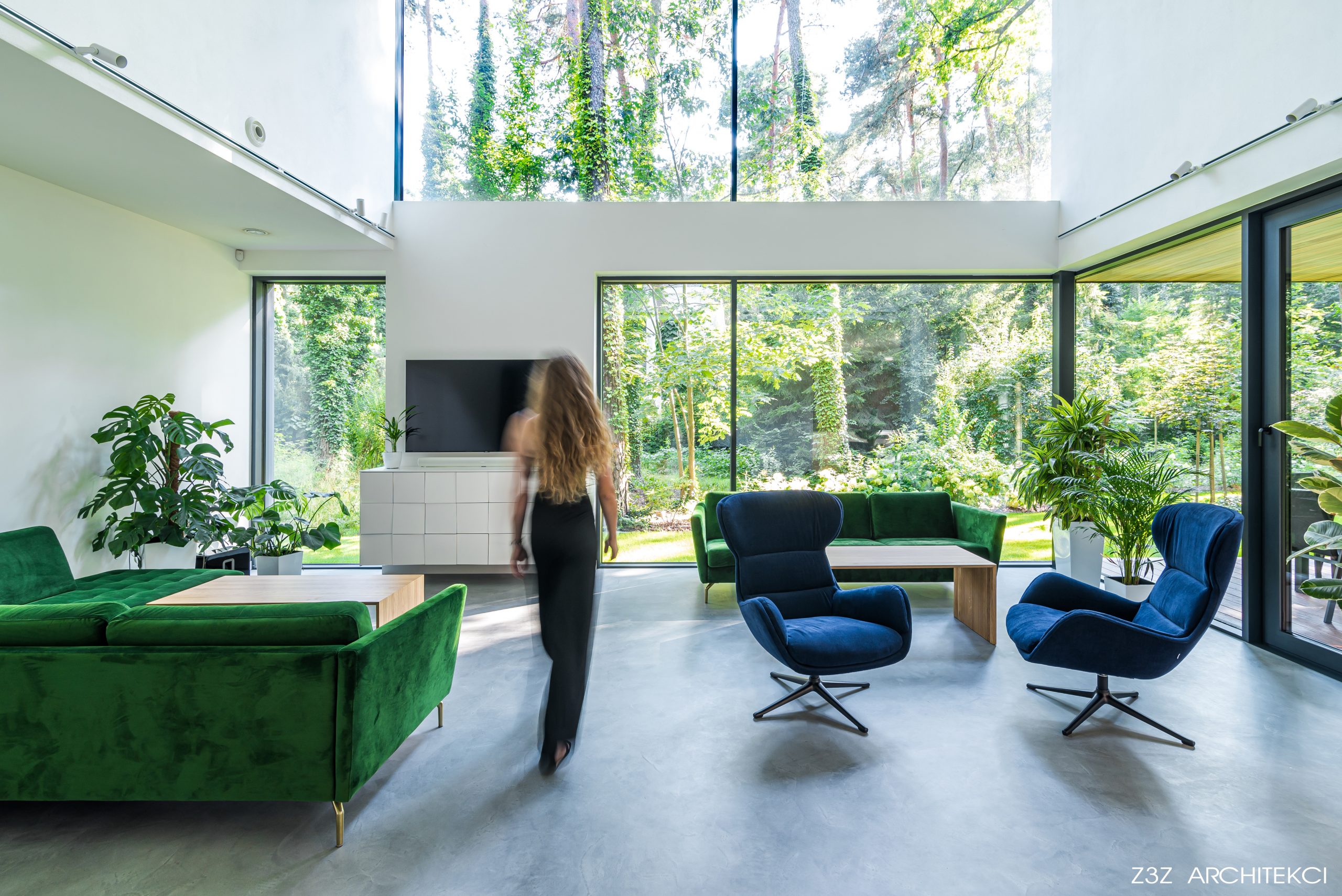 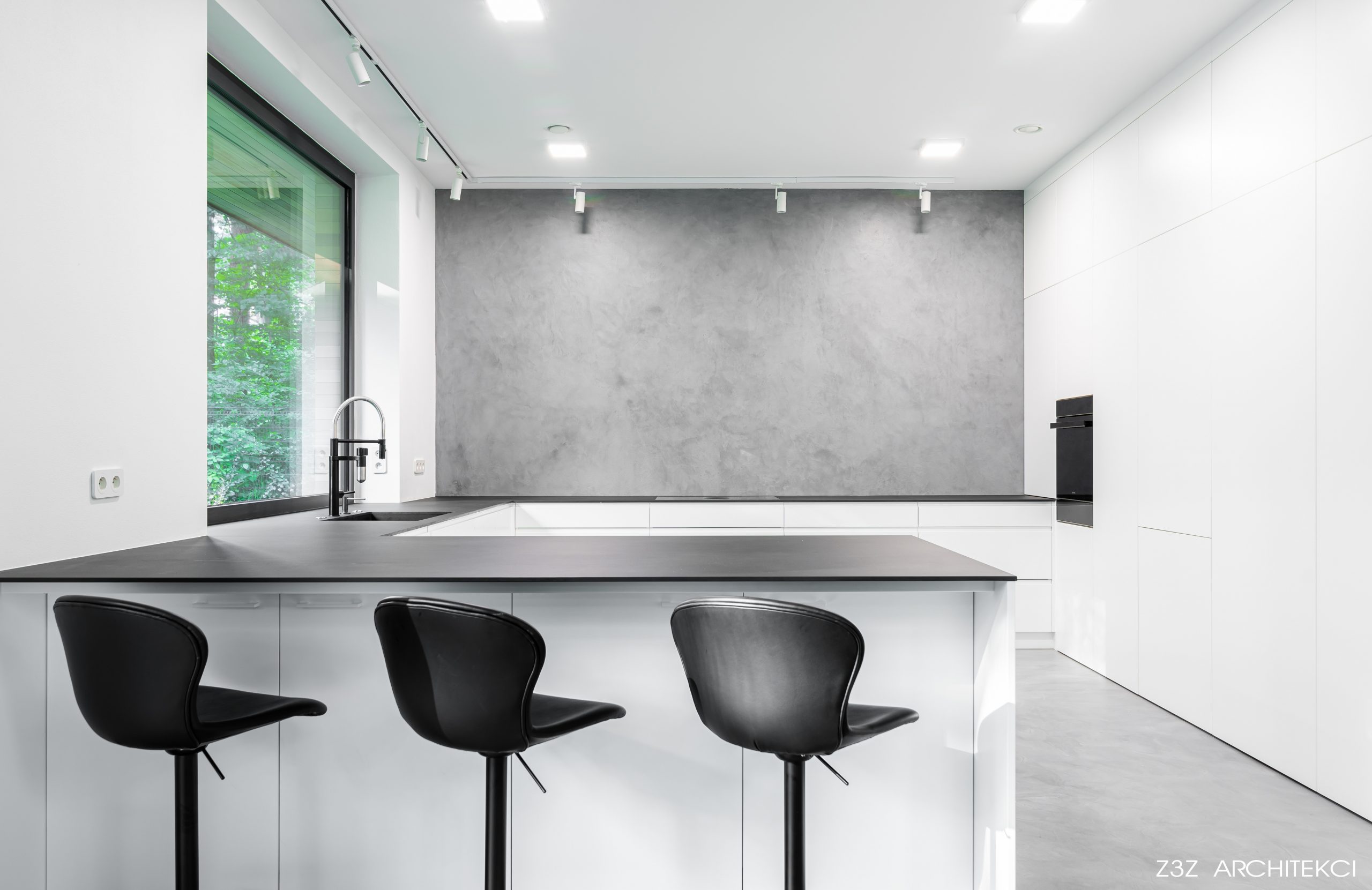 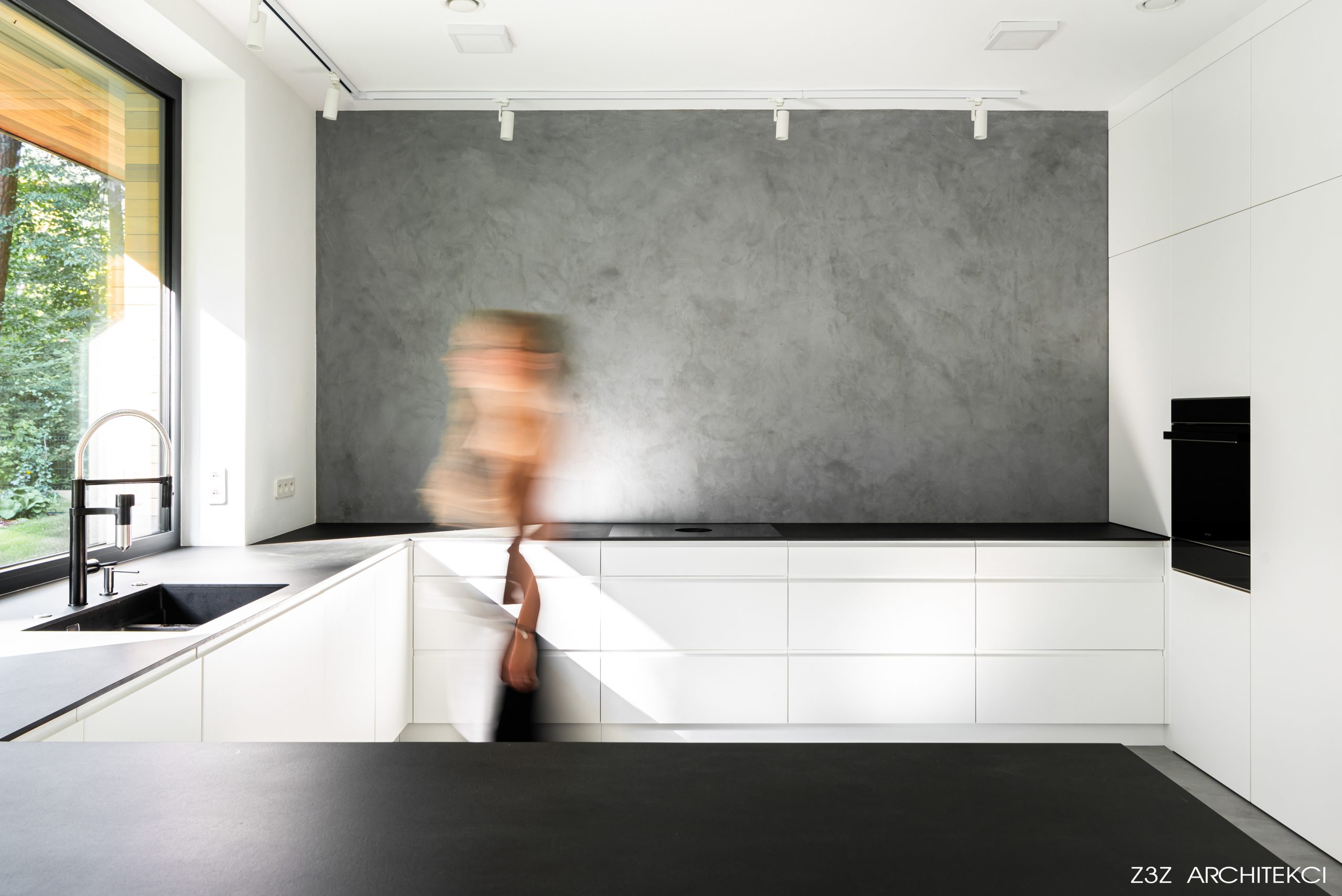 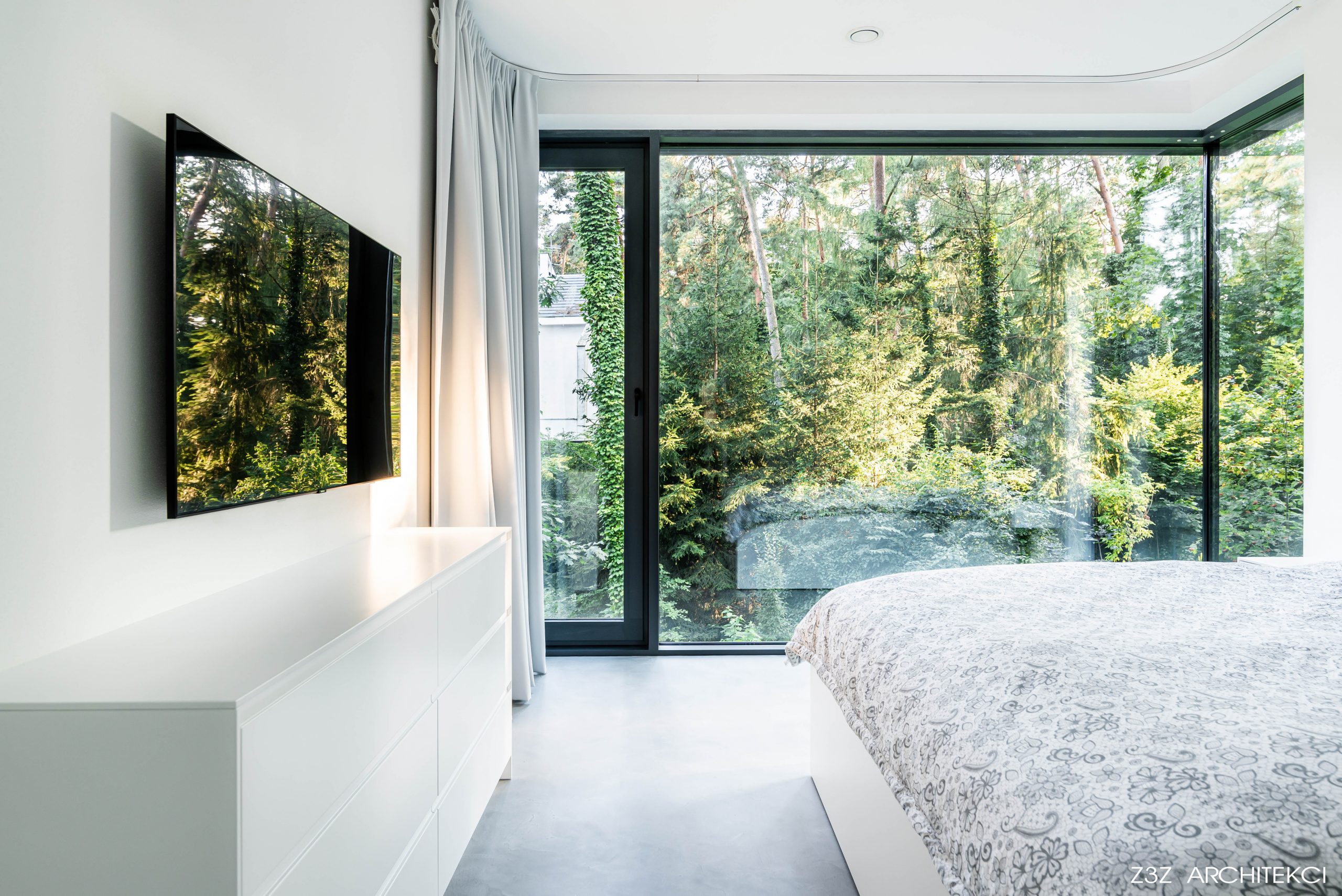 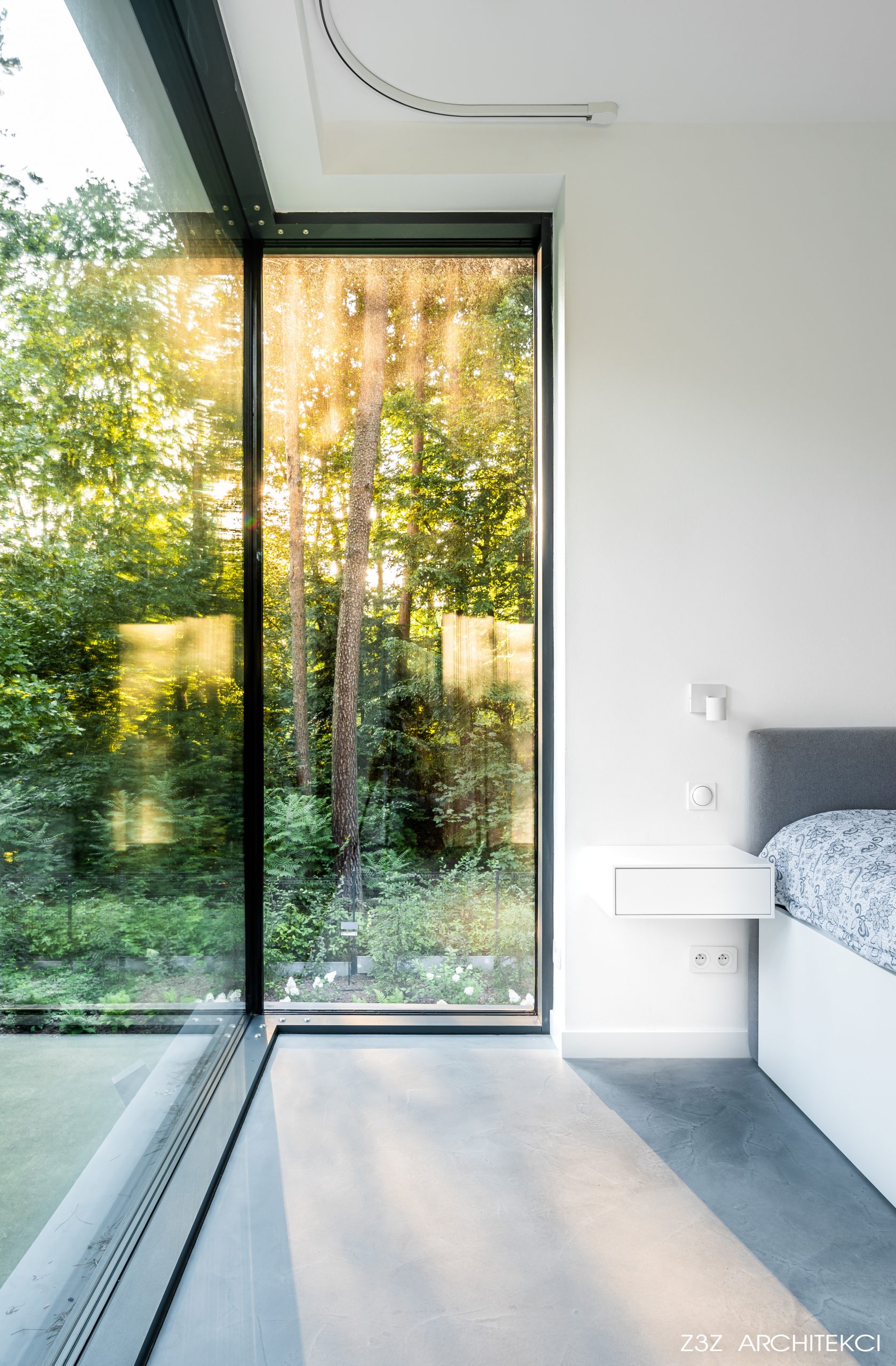 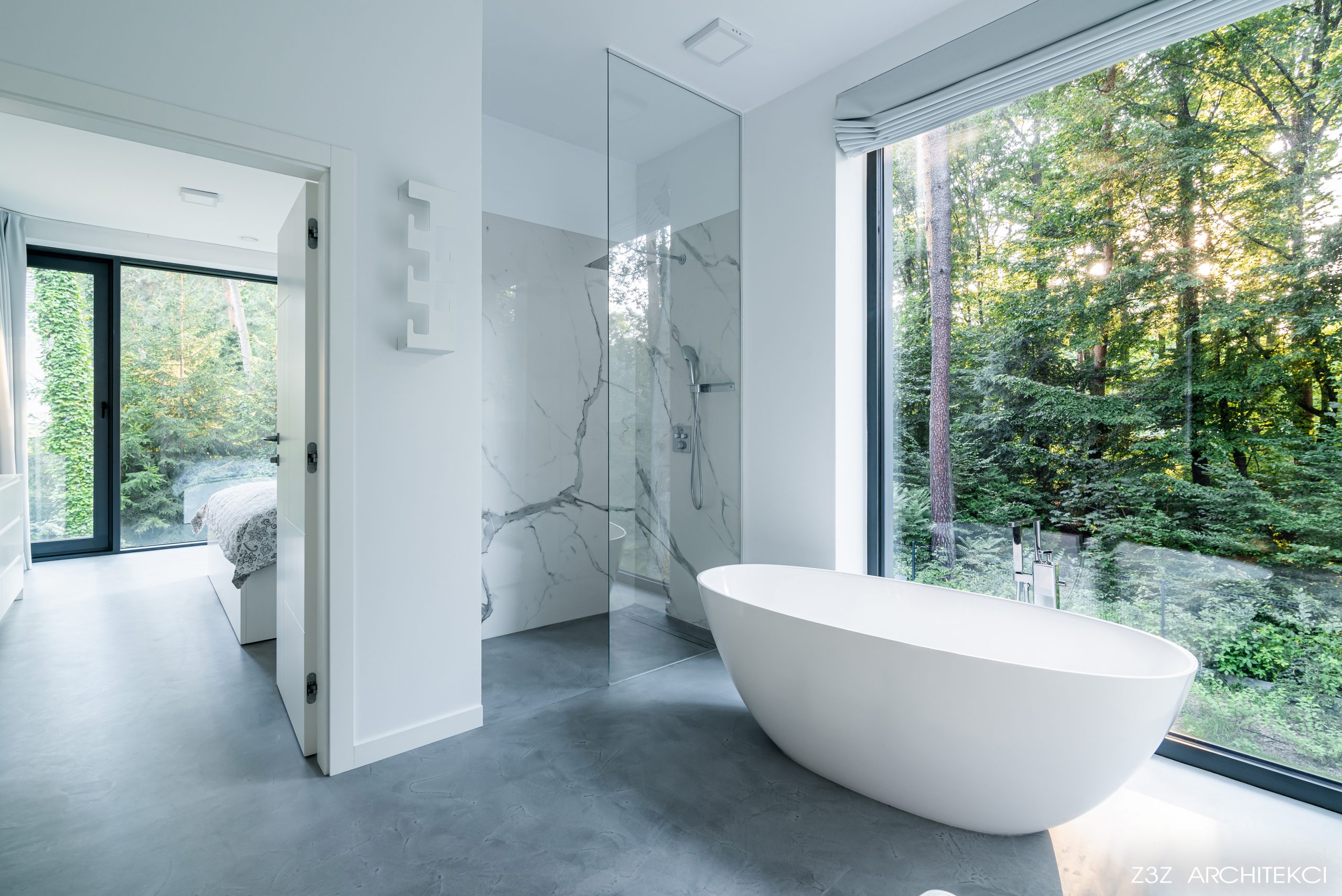 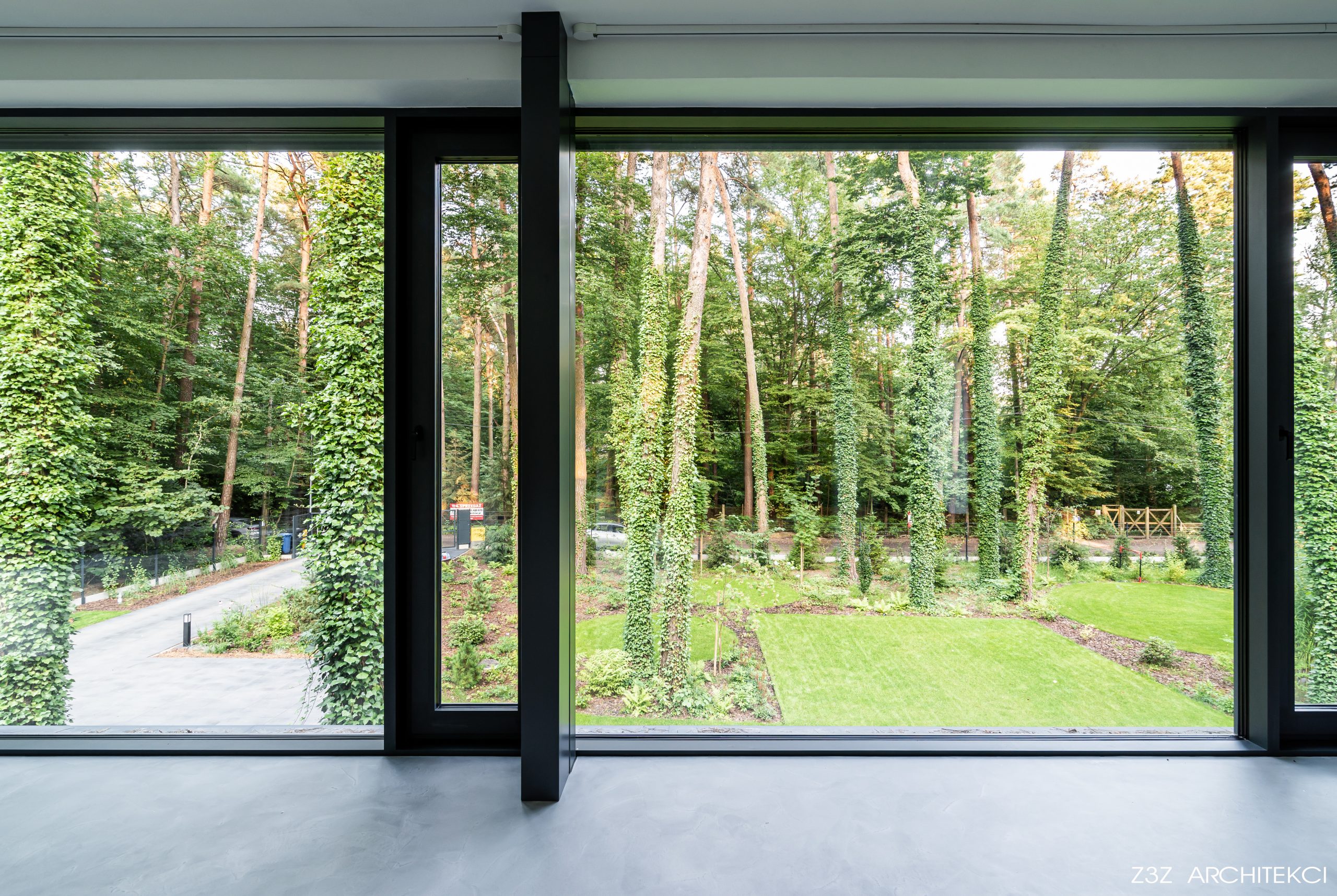 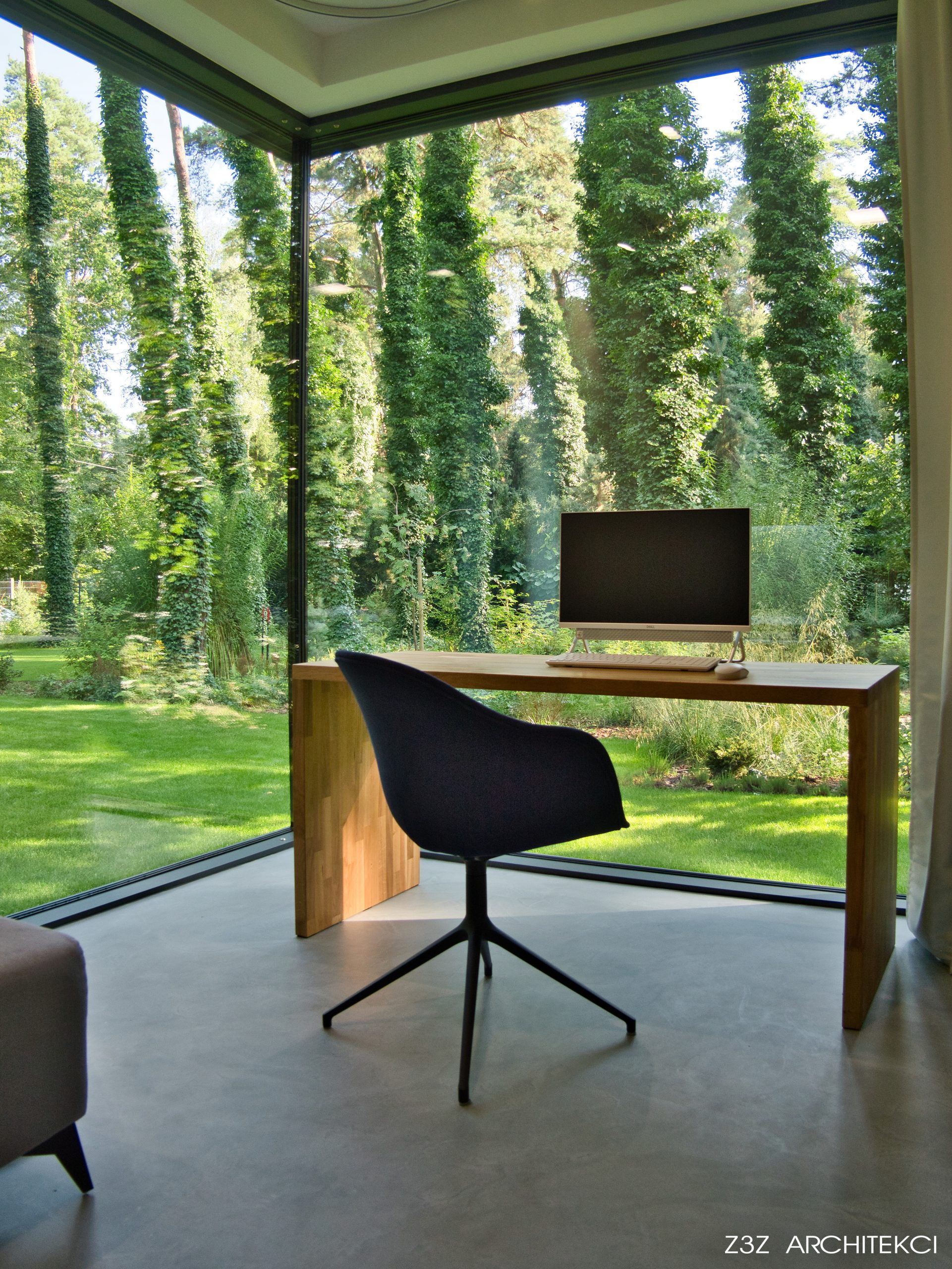