The U-directed house is located in Izabelin near Warsaw on an absolutely unique plot bordering the Kampinos Forest. The living part – the heart of the house is closed with walls on three sides, it opens only and as much as possible only to the wilderness. The name U-directed reflects 2 features that characterize the project. The shape of the schematic diagram resembles the letter U closed on three sides and its opening towards the forest. It is worth noting that the house is closed from the world with walls only up to a certain height. From inside the living area you cannot see your neighbors or the street. Thanks to the windows at the ceiling, and even at the height of the floor, the household members can see the upper parts of the trees of the pine forest surrounding the house. Inside, you get the impression that the house stands alone in the middle of the forest and is surrounded only by the forest. 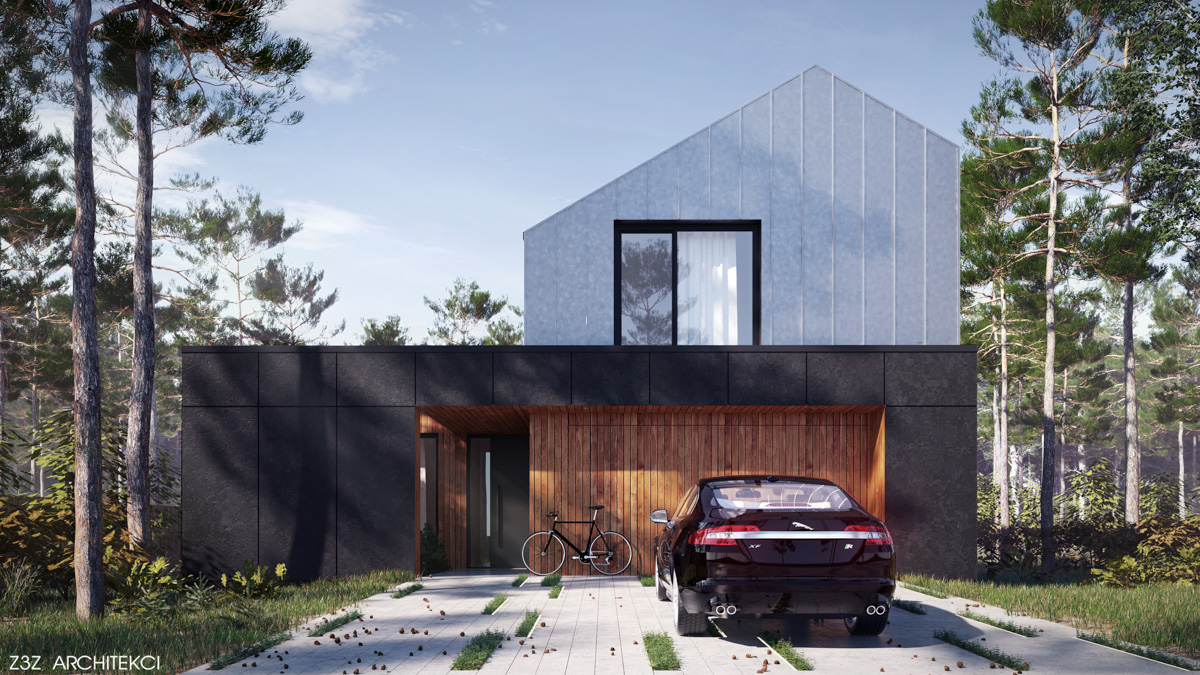 One of the most important issues that the designers faced while creating the project was the fact that the forest to which the building opens is located on the north-western side of the plot. So, taking into account the assumptions of the project, access to the eastern and, what is worse, southern light would be cut off for the day part. This problem was solved thanks to the windows located in the upper part of the walls. Thanks to them, when staying inside, the impression is created that we are surrounded by only the forest and there are no neighbors, and at the same time the rooms are bright and the sun reaches them at any time of the day. The living room has an unobstructed view of the forest thanks to a one-and-a-half-storey-high glass wall, and at the same time it receives a lot of sunlight thanks to the windows located around its perimeter in the upper part of the room on the east and south sides. 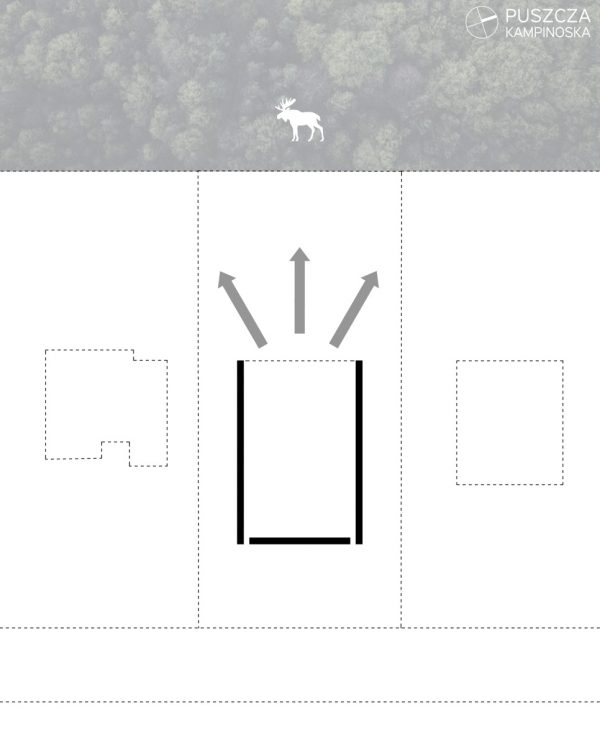 The building consists of two interpenetrating blocks. A dark block of the ground floor and a light block of the first floor. The interior of the ground floor itself rises above one floor. However, its extension was not caused by the desire to raise the walls, but to raise the roof and let light into the interior, to create a bright, high space. The night zone closes in a brighter block of the first floor, which ideologically refers to the scheme of the ground floor. The rooms facing east and south have only relatively standard windows. On the side of the forest, a glass wall reaching the ceiling of the sloping roof was designed. 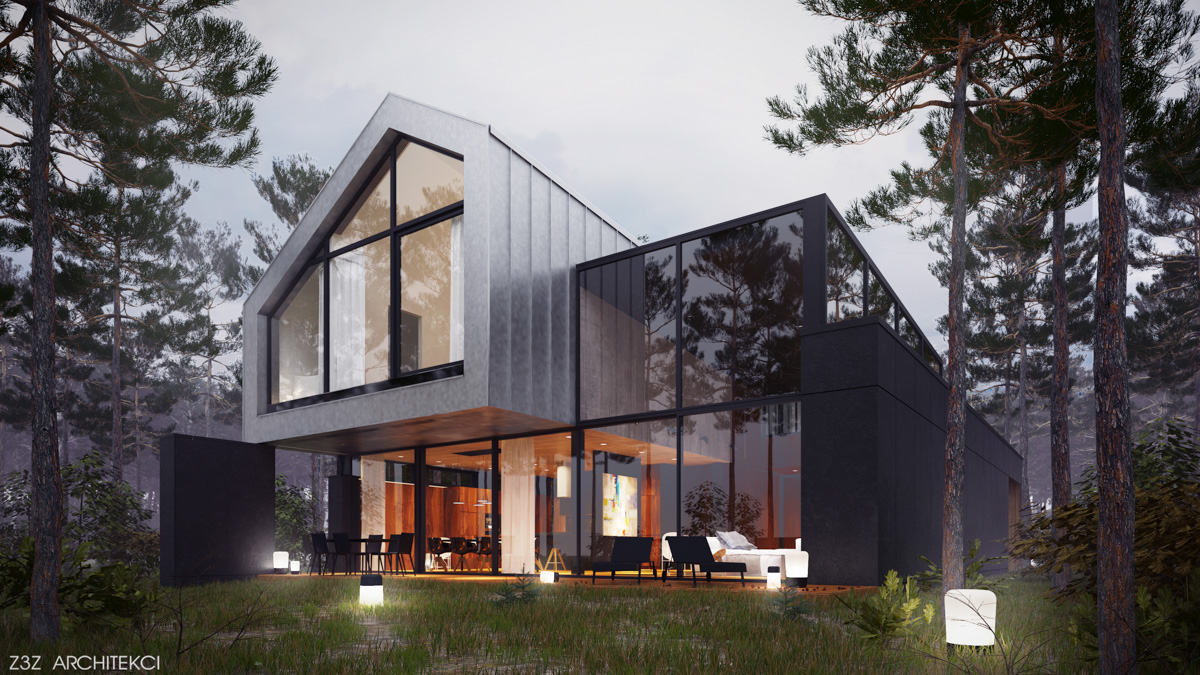 On the first floor, the designers, in accordance with the investor’s guidelines, wanted to create a lot of space under the roof and not close the rooms with a flat ceiling. However, some rooms, such as the bathroom, do not need such heights, while in others the investor would like to have the ceiling as high as possible. The solution to this problem was to create uneven, unusual roof surfaces. Thanks to this, the ceiling is lower in one part and higher in the other. Low in the bathroom and very high in the bedroom, providing a lot of air and space in the interior. The roof is gabled, but has a slanted ridge in relation to the external walls. This made it possible to adjust the height of the rooms to the needs, and the shape of the building gave it an unusual character. 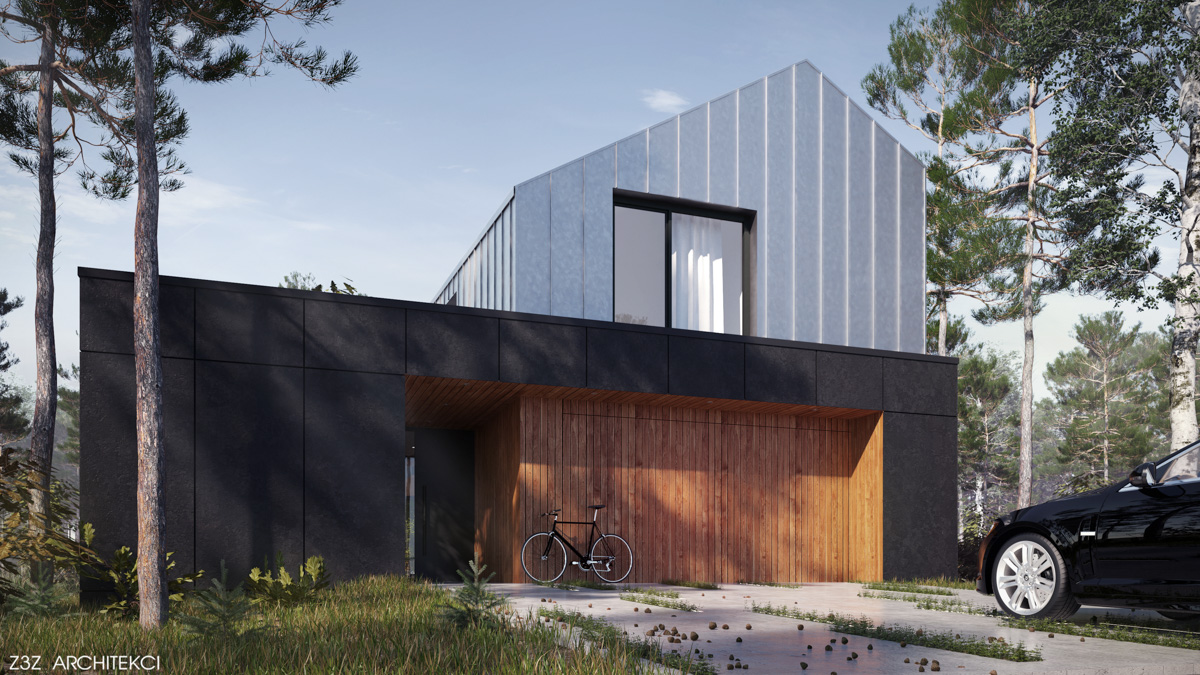 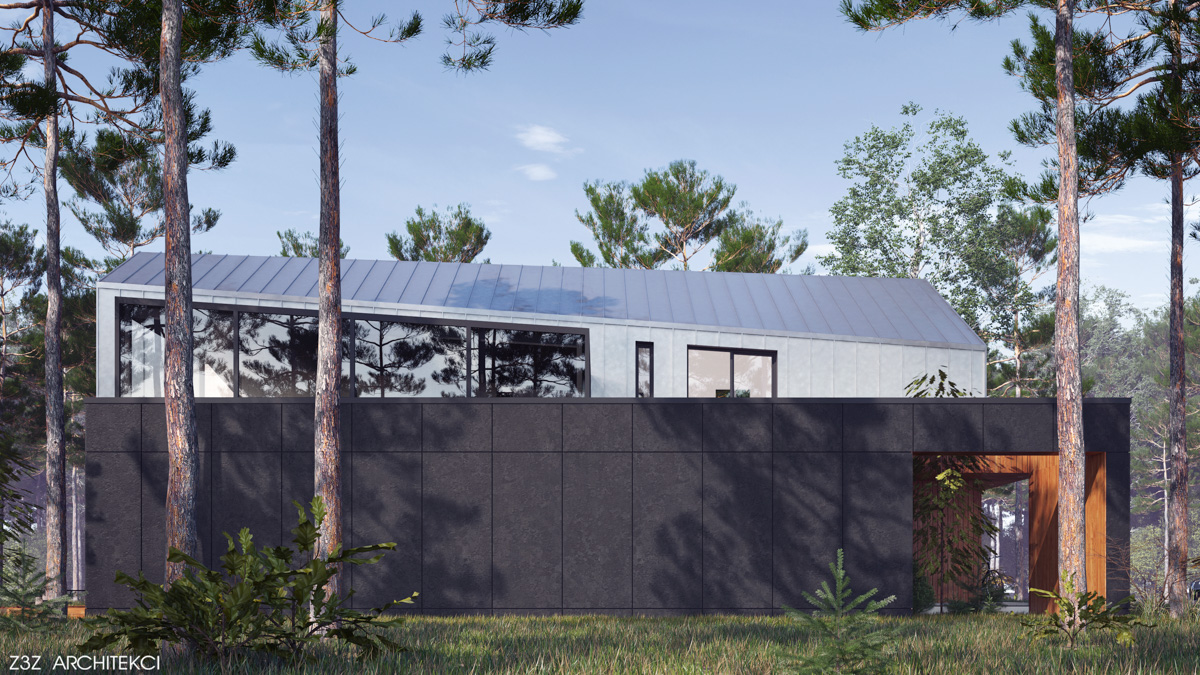 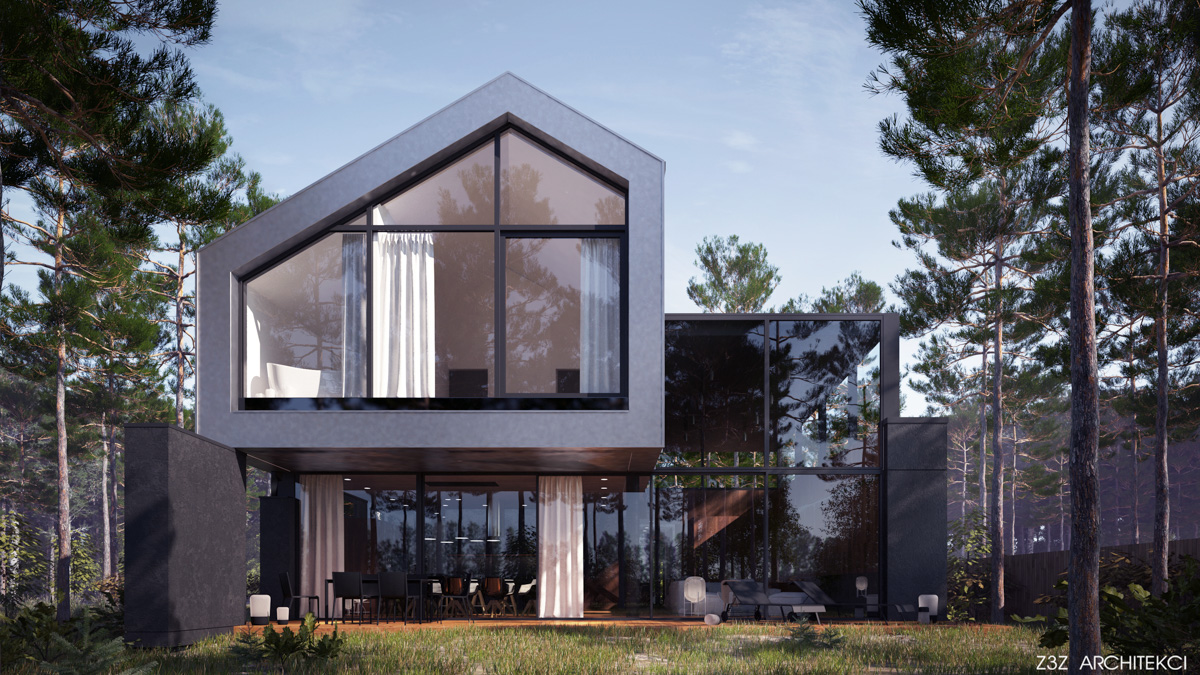 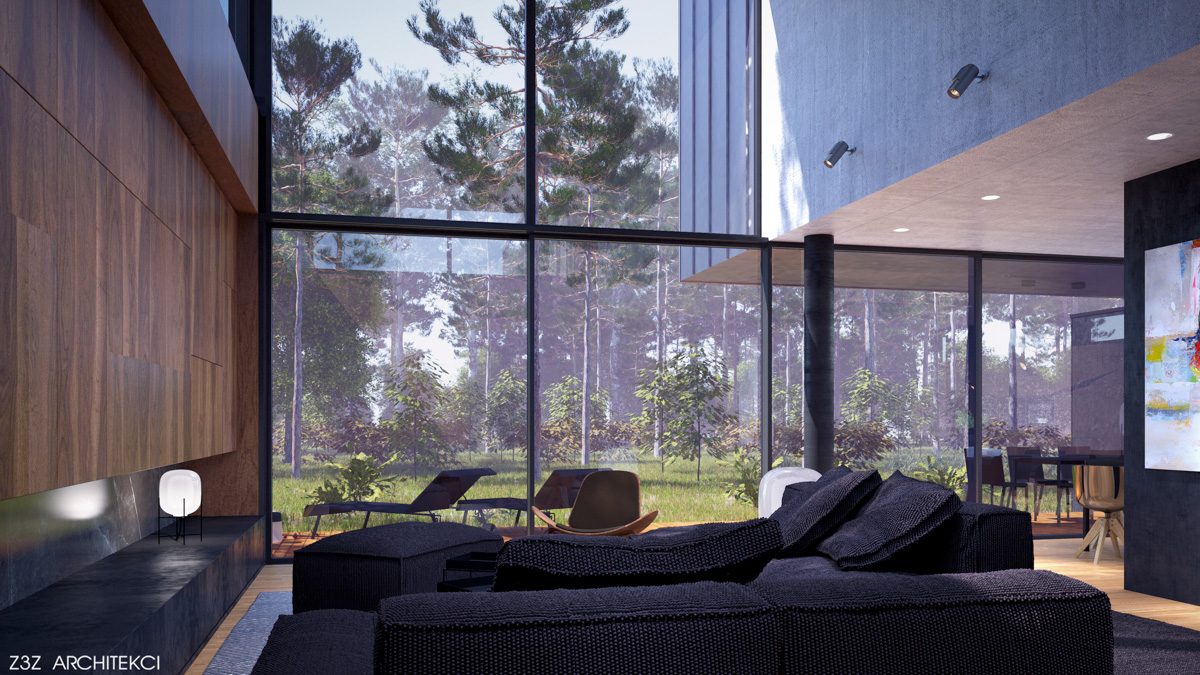 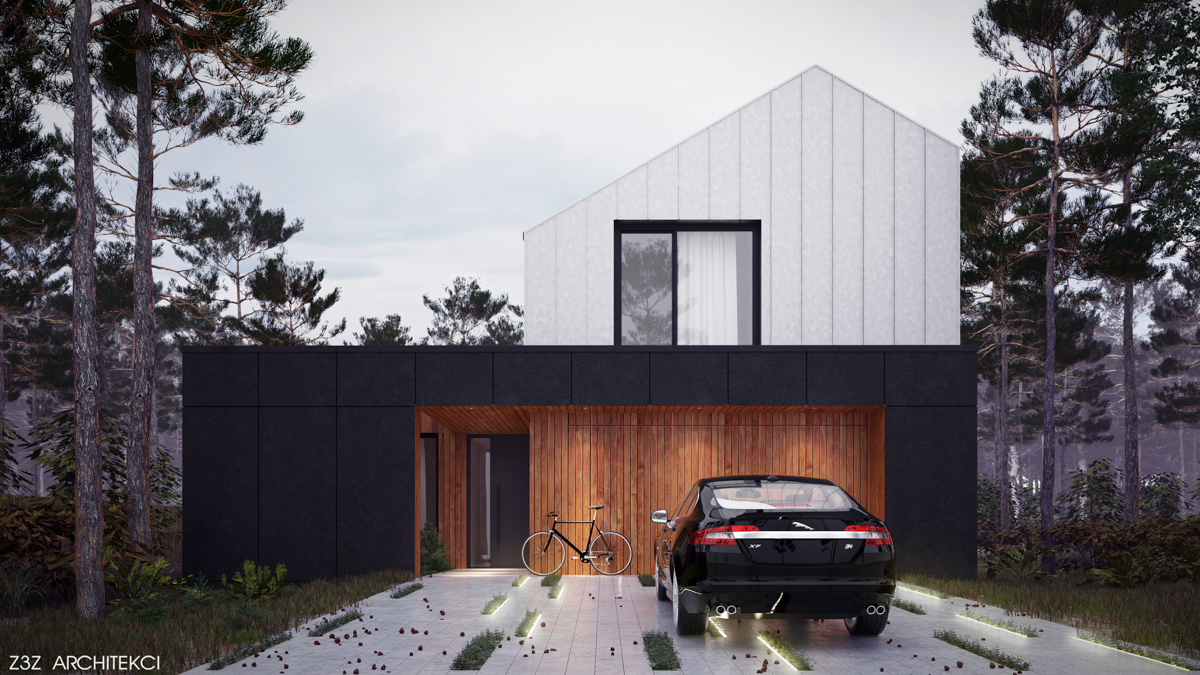